Power over the market

In mid-February, millions of Texans were learning how to get through brutal winter temperatures with no electricity, while many more were researching how to pay for suddenly enormous power bills.

During that same subzero-weather event, a group of Minnkota energy marketers was getting a lesson on how to protect the cooperative’s members from facing similar ice-cold consequences. And they skillfully passed the test.

“We’ve seen some extreme temperatures locally, and we know how that plays into what we do day-to-day,” said energy marketer Mark Fulbright, who has been with Minnkota less than two years. “But during this event we had the opportunity to see extreme temperatures spread across the country, and how that can add a new dimension to how we handle operations here.”

The “we” that Fulbright refers to is a trio of fairly new additions to Minnkota’s power supply and resource planning department. Along with Fulbright, energy marketers Amber Langemo and Isaac Hoffart were all hired within the past two years, all three missing the last polar vortex event in January 2019. They join experienced energy marketer Dan Trebil, an 8-year veteran of powering through climate anomalies.

“They handled a very stressful situation very well,” said Todd Sailer, senior manager of power supply and resource planning. “Trying to incorporate our demand response, managing the wind forecasts and understanding how the markets work – this was one of those experiences that will end up being very valuable for them in the future.” 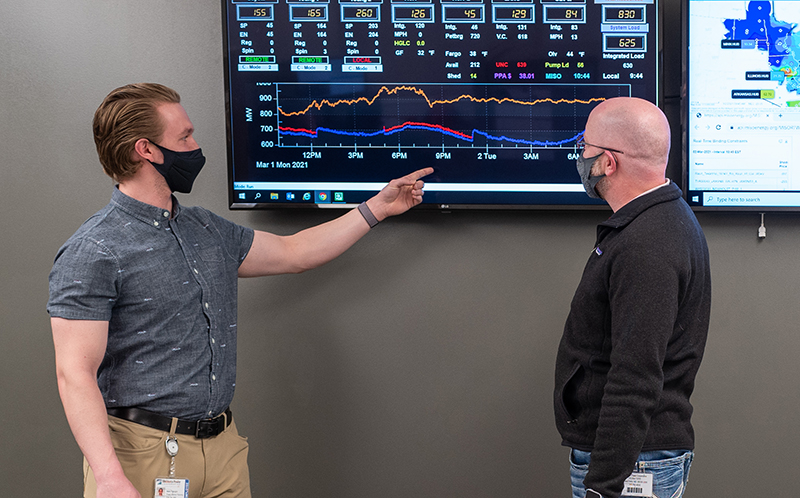 The nearly two-week February cold snap that essentially crippled the Texas power grid started up north. From approximately Feb. 8-14, Minnkota’s service area experienced some of its coldest temperatures of the stretch. As the polar vortex dropped south, both regional demand and weather-related generation issues began to rise.

Midcontinent Independent System Operator (MISO) – the organization that manages the transmission grid and energy markets of a 15-state region that includes Minnkota’s territory – asked its providers to enter conservative operations Feb. 14-20 and declared a Maximum Generation Event on Feb. 16. Over those days, the combination of expanded regional need and less generation availability (from frozen plants, natural gas pipeline constraints and less production from wind farms across the midsection of the country), made the cost of buying energy from the grid skyrocket.

“We saw prices over $100 all hours of the day starting on Feb. 15, and it lasted four to five days,” Sailer recalled. “We might see it that high for a few hours but, typically, in the last couple of years, it’s been averaging less than $20 per megawatt-hour. So when you’re seeing prices of $200, $400, sometimes up to $900, it completely changes what you’re trying to manage.” 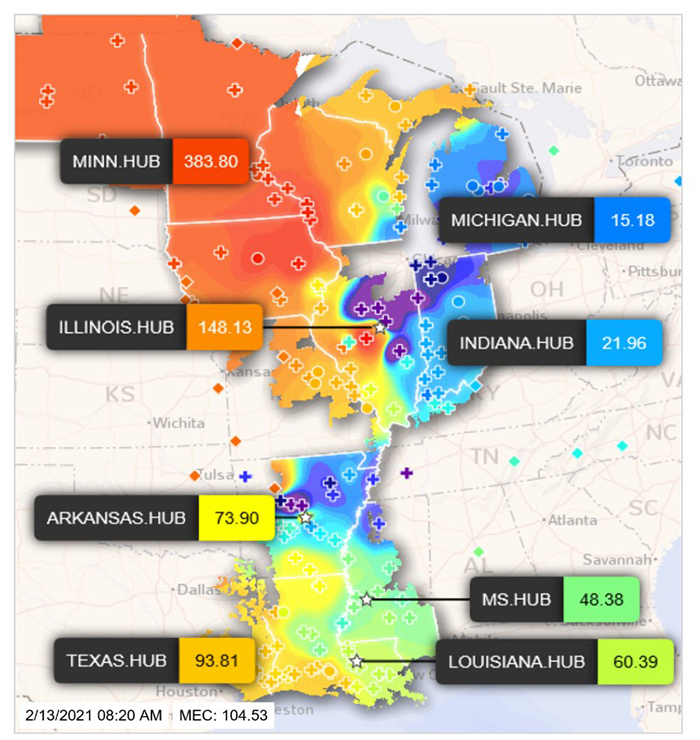 A screen capture from Feb. 13, 2021, shows how high energy market prices had risen in the north at the beginning of the polar vortex, hundreds of dollars higher than average. (Courtesy: MISO)

Minnkota had to protect itself from relying on the volatile market. Although the coal-based Young Station continued to provide electricity reliably throughout the event, wind power generation dropped due to low winds and temperatures. Minnkota’s healthy demand response program – through which members volunteer to have certain electric loads like dual-fuel heating and water heaters controlled for a reduced rate – helped Sailer’s energy marketers decrease the demand on the grid.

“Because we’re scheduling our generation resources into the market, we’re making sure we’re scheduling those resources in the right market. If the power plant’s going to be available or the wind’s going to be available, we’re making sure to schedule that properly,” Sailer explained. “With that, you identify where your exposure is in the market, or maybe identify some opportunities in the market related to our demand response program. We’re making sure we’re doing something that is beneficial to our members and maximizing the value of those resources.”

Ultimately, Minnkota came out of the cold snap with few weather-related service interruptions to its members. There were no rolling blackouts as briefly seen in neighboring grid systems, and no days-long outages as experienced in the south. Minnkota used 84 hours of dual-fuel heat control, which helped avoid high energy market costs. The electricity provided by the Young Station covered the remaining demand and added needed power into the national grid.

“Our value of reliability shined through in a moment where others were facing crisis,” said plant engineering and environmental manager Tim Hagerott, adding that the Young Station is specifically designed to operate in North Dakota’s cold-weather climate. “The majority of our equipment is housed indoors in heated buildings. We also have several systems that utilize heat trace that is covered by insulation to prevent piping and equipment from freezing.” 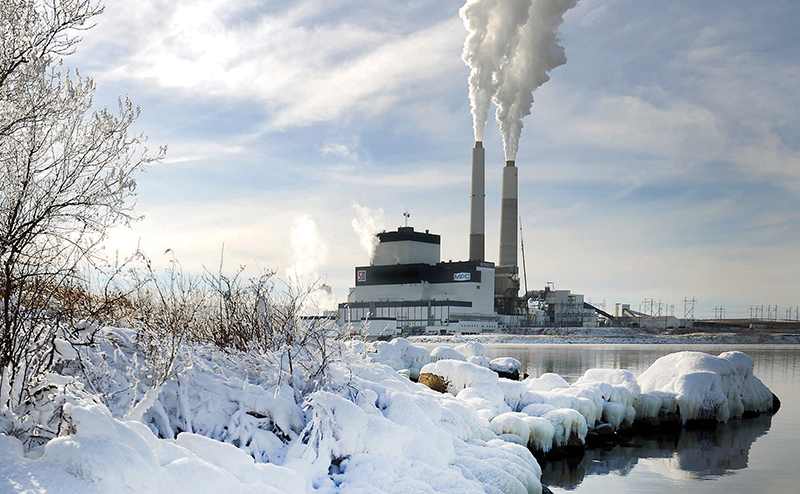 Minnkota’s Milton R. Young Station continued to perform reliably throughout the cold snap, at times even delivering extra power into the regional grid.

In Texas’s unique energy landscape, the situation was starkly different. Many generation resource technologies, including natural gas pipelines, coal plants and wind turbines, could not perform in the once-in-a-century low temperatures. For most of the country, this would mean importing energy from a neighboring grid system operator (such as MISO). However, the Electricity Reliability Council of Texas (ERCOT) is independent of those grid interconnections.

“They’re somewhat of an island when they start having problems on their system, because they’re limited in bringing in other resources from other regions,” Sailer said. “It was obviously a very extreme weather event for them, so some of their units just weren’t prepared for that cold. It wasn’t just one resource – they were nearly all impacted, which resulted in Texas being isolated.” 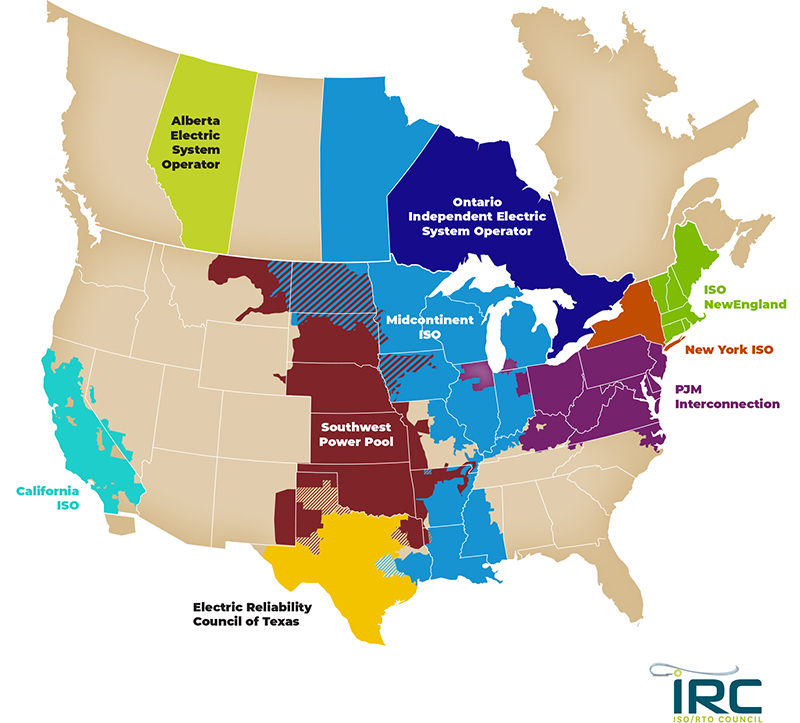 This graphic from the ISO/RTO Council (IRC) shows where MISO (in which Minnkota is a member) overlaps the Southwest Power Pool. Also shown is ERCOT, which was limited in its ability to import power from neighboring grids.

Additionally, hundreds of Texas power consumers who were enrolled in programs that connect them directly to wholesale power rates were burned by that week’s market volatility, receiving bills that were thousands of dollars higher than normal. Minnkota and its member cooperatives protect their member- consumers from this price fluctuation by using their own generation resources to limit market exposure.

When the polar vortex finally waned in late February, Minnkota’s energy marketers were able to return to some normalcy – regular work hours, stable market prices and infrequent demand response needs. The adrenaline may have faded, but the newcomer knowledge will stick around for the next time it’s their job to help keep power reliable and affordable.

“This is a unique job in the sense that it seems like we learn something new every day,” Fulbright said, surrounded by his fellow marketers. “And that week was tenfold.”

“It was exciting, because we hadn’t seen anything like that before,” Langemo added. “You can talk about these things in theory, but when you’re actually doing them, it’s a lot different. It was a great way to learn, when you have three other people to bounce ideas off of. That’s one thing with our group – we do function well as a team.”

Mission Statement: To improve the lives of our member-owners and community by responsibly providing clean, affordable electric energy and other beneficial services while maintaining the very highest standards of performance and member satisfaction. Items for sale by bidNews